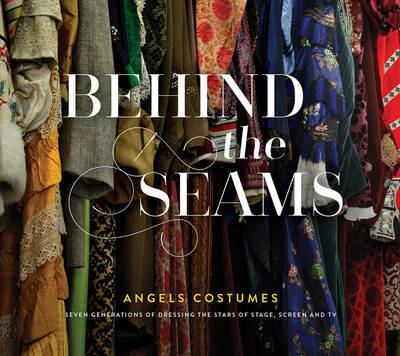 Behind the Seams - Angels Costumes - Seven Generations of Dressing the Stars of Stage, Screen & TV

Angels has been providing costumes for stage and screen since 1840. Behind the Seams is a story of the history of costume for theatre, film TV, London and a family business now in its seventh generation that rose from humble beginnings in the 19th century to become a major force in the world of costume for the movies, television and theatre. With over 1 million costumes and accessories hanging on 6 miles of rails, Angels is the largest dressing up box in the world and the name sewn in hundreds of thousands of costumes for film television theatre productions. Angels can also claim more than a little credit for thirty-six costume Oscar-winning movies, including Star Wars (1977), Titanic (1997) Shakespeare in Love Grand Hotel Budapest (2015). Behind the Seams provides the reader with a unique insight into 175 years of the entertainment industry in London, and the sometimes bumpy evolution of a family business, now in it's seventh generation.Behind the Seams reveals extraordinary secrets about the costumes and their creators. With lavish photos and close up details of trims, lace and fabrics, it's also visually stunning and a joy to dip into for inspiration or escapism.Many of the biggest names in theatre cinema TV Theatre have walked through the doors at Angels including Noel Coward, Laurence Olivier, Elizabeth Taylor, Michael Caine, Judy Dench, Daniel Craig, Gwyneth Paltrow, Damian Lewis, Cate Blanchett, Johnny Depp, Helen Mirren, Benedict Cumberbatch, Keira Knightley and Eddie Redmayne to name but a few. All have been dressed and undressed by the Angel's costumiers who share some of their secrets and tips of the trade in this exclusive backstage pass.