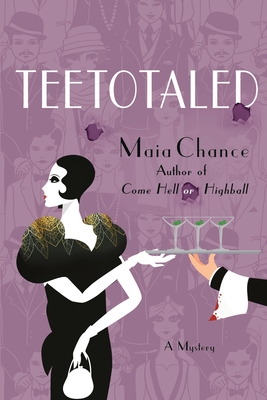 After her philandering husband died and left her penniless in Prohibition-era New York, Lola Woodby escaped with her Swedish cook to the only place she could--her deceased husband's secret love nest in the middle of Manhattan. Her only comforts were chocolate cake, dime store detective novels, and the occasional highball (okay, maybe not so occasional). But rent came due and Lola and Berta were forced to accept the first job that came their way, leading them to set up shop as private detectives operating out of Alfie's cramped love nest. Now Lola and Berta are in danger of losing the business they've barely gotten off the ground--work is sparse and money is running out. So when a society matron offers them a job, they take it--even if it means sneaking into a slimming and exercise facility and consuming only water and health food until they can steal a diary from Grace Whiddle, a resident at the "health farm." But barely a day in, Grace and her diary escape from the facility--and Grace's future mother-in-law is found murdered on the premises. Lola and Berta are promptly fired. But before they can climb into Lola's brown and white Duesenberg Model A and whiz off the health farm property, they find themselves with a new client and a new charge: to solve the murder of Grace's future mother-in-law.Teetotaled, Maia Chance's sparkling new installment in the Discreet Retrieval Agency Mysteries will delight readers with its clever plotting, larger-than-life characters, and rich 1920s atmosphere.

Praise for Come Hell or Highball "Witty and charming."--The Seattle Times"Flawless...Chance displays a deft wit throughout."--Publishers Weekly (starred review)"Period details, including language and especially fashion, provide much of the appeal in this clever adventure, which will make a nice fit for fans of Australian flapper Phryne Fisher in Kerry Greenwood's popular series."--Booklist"Maia Chance's novel is an absolutely delightful read. It's a wonderful period piece with a strong, sassy and smart heroine that will keep the reader turning the pages till the very end. I can't wait to read this author's next one."--Emily Brightwell, New York Times bestselling author of Mrs. Jeffries Turns the Tide"Lola has a wonderful attitude and smart mouth, with fast-flying quips. Readers who enjoy their mysteries with a humorous flair need to take a chance with this author."--RT Books Reviews (4 stars)"Maia Chance brings the Roaring Twenties to vibrant life in this delightful series debut. Intrepid heroine Lola Woodby will lead you on a thrilling adventure as she tries to solve a murder with the help of her Swedish cook and a very sexy private investigator while dodging bill collectors and well-meaning family members."--Victoria Thompson, national bestselling author of Murder in Murray Hill

MAIA CHANCE was a finalist for the 2004 Romance Writers of America Golden Heart Award and is a Ph.D. candidate at the University of Washington. She is writing her dissertation on nineteenth-century American literature. She is the author of the Discreet Retrieval Agency Mysteries (Come Hell or Highball, Teetotaled, Gin and Panic) as well as the Fairy Tale Fatal mystery series.